The Boys of Summer Breaks 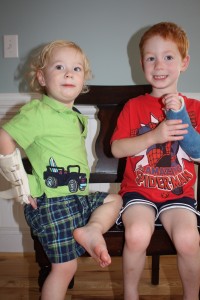 Lately I’ve felt like I’m trapped inside the children’s book “Five Little Monkeys Jumping on the Bed.”  Only in my version of the story, I have three monkeys, and my little monkeys are breaking their arms instead of bumping their heads.

I could hardly believe it myself when Eli, my oldest son,  broke his arm last week just one week after my youngest son broke his arm. What are the odds of that happening?

Eli fell while playing at a children’s play gym. He’s been there several times before with no injuries. It just was one of those freak accidents. His hands slipped off the equipment, and he landed on his arm the wrong way.

Everything about Eli’s demeanor after his fall was eerily like Siler’s just one week ago. Eli cried buckets of tears, and he  held his arm against his torso and wouldn’t let go of  his wrist for dear life. I could feel it in my bones. I knew he’d broken his arm.

At Urgent Care, the x-ray technician asked Eli if he wanted to see the pictures of his bones. I glanced at the screen and quickly indentified a greenstick fracture. I’m now a pro at spotting one on an x-ray.  This was the exact same fracture I saw last week. It’s too bad doctors won’t give you a discount if you can identify the problem and diagnose it yourself. With the number of trips I’ve made to the doctor lately, I’m at least deserving of a punch card for frequent visits or my own parking space with my name.

The next day we visited an orthopedic office where Eli was fitted with a blue cast. We saw the same doctor who put Siler in a brace. I felt somewhat nervous about sitting in his office again thanks to the woman on the elevator who made some joke about DSS getting involved. Would he think I’m a negligent mom? What kind of mom brings two different children in for broken arms in a seven-day period? Thankfully, he didn’t make me feel like the worst mom in the world. The doctor said he doesn’t see it often, but it has happened before. I’m not the only mom to have two kids with arm fractures at the same time!

However, there was one thing he said that was a bit unsettling. He said it seems like there’s always one kid in a family who’s accident prone and makes visits to his office frequently. Yikes! I don’t want to think about future accidents, especially those involving breaking bones. I hope my boys spare me the drama and the trauma, or I’ll be aging rapidly. Their college funds will turn into a facelift fund to erase my worry lines.