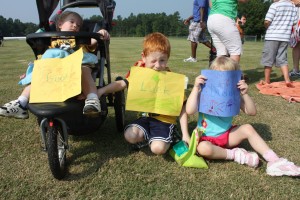 This past weekend was a big deal for my husband. He competed in his first triathlon. For weeks, he had been training for this day, and the kids had listened to us talk about Daddy’s big race.  Mark never asked us to come out to watch and support him, but I was adamant that we all be there. I wanted the kids to see that you can work hard at something you’ve never done before and succeed. That’s a quality that I hope they get from their dad. He’s not afraid to try new things, and he has the motivation to get off his butt and do it. I often don’t like to branch out of my comfort zone…at least not without a swift kick to the butt.

Getting to the triathlon on time was a challenge. I felt like I endured a mini-triathlon just  jumping through hoops to get three kids dressed, packed up and out the door at the crack of dawn.  We had to be inside the park by 7:30 a.m. before it was closed to traffic, and it was about a 20 minute drive to the park from our house.

I woke up the morning of the trialthon feeling a little crabby and anything but well rested. Two of my three kids had been up during the night. I don’t know why it is that kids can sleep well for months, and but the one day you have to get up extra early they develop a sudden case of insomnia. As I secretly mourned the loss of my sleep, I heard Mila and Eli talking about why we were up in the dark.

“It’s still dark outside, Mommy,” said Eli. “Are we going to the race in the dark?”

“Yes. The race starts really early this morning, and we need to hurry so we can get there,” I explained.

To my four-year-old twins, I had said the coolest thing. Leaving the house before the sun comes up is magical in their little minds because it’s so out of the norm. Heck, leaving my house before 9 a.m. on a typical day is nothing short of a miracle with all the loot I have to pack up.

As we drove down the interstate, the sun began to rise. “Look at that sun, Mommy! It’s so pink and pretty,” said Mila.

She and Eli giggled about the sun following us in our car, and they talked about how the sun and moon had to take turns being in the sky. I love how children get so excited about the small things that grown ups often overlook in the hustle and bustle of our world. I probably would have missed the sunrise altogether if they hadn’t reminded me to take the time to really see and appreciate the beauty of God’s creation.

Siler, on the other hand, had no time to waste watching the sunrise. He had something else round and sweet in his sights. That child can spot a Dunkin Donuts sign a mile away. “I want Donut. I want Donut,” he said. Of course, we had to stop to load up on munchkins. I mean “America Runs on Dunkin,” and we were going to a race after all.

We arrived at the triathlon just in time. I’ll admit it wasn’t exactly a picnic having to keep tabs on three children by myself in the sweltering heat and in such a large crowd of people. I also had my first experience of taking a child to a porta-potty, and all I can say is I could really live without ever having that experience again!

However, it was worth the sweat, stress and tears (and almost vomiting at the smell of the porta-potty)  just to hear the kids cheer for their dad as he crossed the finish line. They rang their cow bells and waved their homemade signs in the air. It didn’t matter to the kids that he didn’t finish first. He was a winner because he was their daddy, and he was in a race. To them, he was a superhero. 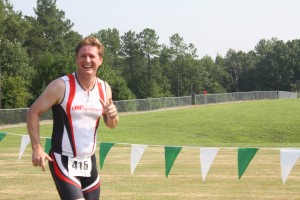