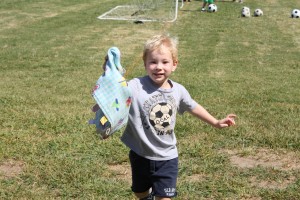 Last week we suffered a big loss. Taggy, my three-year-old son’s security blanket and B.F.F., disappeared. All search efforts inside and outside our home have come up empty handed.
I’ve questioned my little boy numerous times about Taggy’s whereabouts, and I’ve gotten several entertaining answers. First, I was told that a baby stole it. I don’t know about your neighborhood, but mine apparently is plagued by sneaky  babies who go out unsupervised to steal belongings from unsuspecting preschoolers. I love that boy’s imagination.

Then I was told that a stray black cat who wanders around our neighborhood took it. This tale almost seems believable. I’ve seen that cat, and he just looks like he’s up to no good.

The third excuse was that Daddy threw it in the trash, and the garbage truck took it away. Poor little guy! I can’t believe he’s still scarred by seeing the garbage truck carry away his broken toy vacuum cleaner nearly seven months ago.

It’s been six days since Taggy went missing. Reality is beginning to set in that Taggy may be lost forever. I don’t know who is more devastated—-my son or me.
At the risk of sounding like a sap, I’ll admit that we’ve both shed some tears and lost some sleep over our beloved Taggy. Siler has lost his favorite toy and bedtime snuggle companion. He and Taggy were very tight. He loved to rub the tags on the blanket whenever he was tired or upset. In fact, he’d worn holes into two of the tags. That takes some dedication to rubbing!
For me, the loss of Taggy means the end of the baby years. His blanket attachment was the last baby thing about my little boy. The youngest of my three children, he’s grown up far too fast. We’ve already passed the milestones of transitioning to a big boy bed and potty training.

I will miss watching the way his lips pooched out (like Maggie from the Simpson’s) as he rubbed Taggy and the little talks I’d overhear him having with Taggy. As I look back at the picture above of my son running at the end of his soccer practice with Taggy in hand, I can almost hear him shouting these often repeated words. “Taggy loves me. He my friend.”

R.I.P., Taggy. You may be gone but you will never be forgotten.