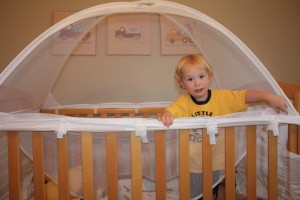 At approximately 7 a.m. Thursday morning, a crime took place at my house. The culprit, a 28-lbs white male with blue eyes and curly blonde hair, was spotted in my bedroom.
My husband and I awoke to tiny footsteps that echoed like elephants running a sprint down the hallway. Soon after we heard giggles. However, this time there were three giggles, and that meant trouble. A wave of panic shot all the way up my spine. I sprung up in bed.  We had a prison break. Siler had mastered the art of fleeing the crib.
“Look. We got Siler out his crib,” said Eli, in a very proud voice.

My husband and I both sighed because we knew what that meant. Life was about to get more complicated.

I immediately fell back onto the bed and pulled the pillow over my head. Maybe I was having a nightmare. I couldn’t be hearing this correctly.  My four-year-old twins, one with a broken arm, helped their almost 2-year-old brother, who just recovered from a broken arm, escape from his crib.

Mila sensed my concern. “Don’t worry, Mommy. We pulled him out very carefully so he wouldn’t break another arm or leg or something,” she said.

“You did what? Why would you do that? That’s very dangerous. He could have gotten hurt,” I exclaimed.

“But he didn’t,” said Eli, who repeated this over and over again. Eli is my child who seems to think if he just puts a positive spin on things and keeps repeating it that I’ll eventually see things his way.

“We just climbed up on the crib like a ladder, and Siler put his leg over and we just pulled until he fell out,” said Mila.

Needless to say, a long lecture followed about the dangers of helping baby bro out of the crib.

Now that the seed had been planted in Siler’s head, I knew it was only a matter of time before he figured it out for himself. Sure enough he did. He jumped ship Friday afternoon at nap time. You can imagine how startled I was to see him standing at the bottom of the stairs when I thought he was sound asleep in his crib.

Determined to outsmart a toddler, my husband suggested on Friday night that we put Siler’s x-large sleep sack on inside out. Our theory was if he couldn’t unzip it, he couldn’t throw a leg over the crib rail and get out.

To our surprise, he appeared before me bright and early Saturday with his sleep sack completely intact. Maybe he has a future career in magic, or maybe he posesses some super Spider-Man powers. I wish I had a video rolling for that one. I would have loved to have seen how he did it.

Before hanging our heads in defeat, we tried a crib tent that my friend graciously loaned to us.  Little did she know she was saving my sanity! Many of the moms from my multiples club swear by them. I have to say I’m a big fan now, too.

I know some of you reading this will say I should give it up and move him to a big boy bed. I know that’s coming, but if I can keep him in a crib for five or six more months, I’ll  take it. Yes, I confess that I have selfish motives. It makes my life easier for now. Why complicate it if I don’t have to yet?

God bless the inventor of the crib tent!