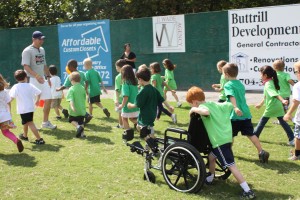 This month we said goodbye to Breezy, the wheelchair that had become a daily part of our five-year-old son’s life since he broke his leg Aug. 3. Though temporary, the experience of having a child with special physical needs has been an eye-opening experience for me.
I never fully appreicated the challenges that people in wheelchairs face each day until I had to push my son around in one. Just because a place is wheel-chair accessible doesn’t mean it’s easy to get into. I’ve struggled to push Eli in his wheelchair through doorways, over uneven sidewalks and sometimes pushed him across parking lots in search of a wheelchair ramp.
Keep in mind that I also had two kids walking with me everywhere too. Fortunately, my kids are still small enough that I could stuff two in the wheelchair. My three-year-old enjoyed riding with his big brother in and out of the school building each day.
The biggest obstacle we faced was the day I had to pick up my kids from school during a down pour of rain. Try pushing a wheelchair all while holding an umbrella over the heads of two other children is quite a feat. Poor Eli was soaked and had to change clothes when we arrived home.
Secondly, I’m astonished by how rude people can be. Adults were often the worst offenders, and that’s a shame because they should know better. I can’t tell you how many times I heard people talking about my son as if being in a wheelchair meant that he couldn’t hear. These are some of the comments I frequently heard. “It would suck to be that kid.” “How terrible to start school in a wheelchair.”
Fortunately, kindergarteners are more accepting of people who are different. Eli’s classmates are so supportive and took pride in helping him at school. They also cheered him on as he reached milestones like transitioning from a full leg cast to a walking cast. The first day Eli went to school without a cast one mom said her child ran off the bus stop saying, “Guess what, Mommy? Eli doesn’t have a cast anymore. He can walk!” His teacher even did cartwheels at recess to help celebrate his new walking success.
Most importantly, I learned that my son is more resilent and stronger than I give him credit for being. After his accident, I nearly worried an ulcer into my stomach about how he would adjust and cope with being in a full leg cast. I had the usual worries of a first time kindergarten mom, but I also worried about how he would get along in a wheelchair and if he would feel isolated from the other kids. To my surprise, he’s handled it all remarkably well and complained very little. Honestly, I don’ t think I could have handled the same challenge with such a can-do attitude.
Eli’s school has a running program for students, and when it kicked off this fall, he was determined to participate. He pushed his wheelchair halfway around the track, and then rode in the wheelchair to the finish line. On National Walk to School Day, he was determined to walk to his classroom for the first time without use of a wheelchair. He even requested that I park at the very end of the parking lot so he’d have a longer distance to walk. What an incredible spirit this child has! When Eli reached his classroom, I had to hold back tears. I’m so proud of my son. He’s an inspiration to me.