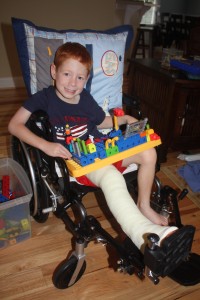 I’m usually not a superstitious person, but I have to admit I’m now freaked out about the month of August. For the second August in a row, my son, Eli, has broken a bone. Last summer he broke his arm on Aug. 10, and on Aug. 3 of this year, he broke his leg. Next August I’m covering him in bubble wrap and pillows.

Eli went on an early morning father-son bike ride, and their bikes collided as they turned a corner. My husband only had bruises, but poor Eli broke both bones in his right leg. He’s now in a cast that covers him from his foot to his thigh.

And can you believe he was actually wearing the same shirt when he crashed his bike as he had on when he broke his arm last summer? I know it’s just a coincidence, but you better believe that yellow shirt with a sand shovel and the words “Dig It” will be taken out of rotation. Maybe I’ll burn it to be safe.

Perhaps I should have known this was coming. I had been to a concert the night before and didn’t crawl into bed until 1 a.m. I can’t tell you the last time I’ve been out that late. There has to be an unwritten rule that my children must get sick or have accidents at the worst possible times. It’s usually when I’m already sleep deprived. I had literally been out of bed five minutes when I heard screams and banging at the door. I opened it to find my husband holding a hysterical Eli, and his leg was dangling in a direction that God never intended it to go.

The first important lesson I learned that day is helmets are lifesaver. I grew up in the no helmet generation, but they are a MUST for any kids riding bikes. The ER doctor actually thanked me for making him wear one because he still sees so many children with head injuries that could have been prevented.

Secondly, I learned that you don’t want to have an accident and need medical attention during rush hour traffic. It took what seemed like an eternity to drive seven miles down the interstate to the hospital with a screaming child in my arms.

At the ER, I suddenly realized that I hadn’t even brushed my teeth or my hair. Oh, the things a mom will do for her child! My organic look is something you don’t want to see. My naturally wavy and disheveled hair made me look like I belonged in some 80s hair band. Not having a mirror in front of me, I asked my husband if my hair looked bad. He chucked. “It’s pretty bad,” he said. That would be the important lesson my husband learned that day. When the wife looks horrible, is under great distress and asks if she looks horrible, lie.

It’s been a long and stressful week since the accident. Right now Eli can’t walk at all. He was in a lot of pain the first few days, but fortunately it’s easing off. He moves around in his pediatric wheelchair on the hardwood floors downstairs or scoots around on his bum, but for the most part, my husband and I are his transportation around the house.

We’ve had some challenges to overcome like how to take carry and a five year old to the potty while keeping his leg elevated and pulling down his pants so he doesn’t wet them. It’s a lot like playing twister and water guns at the same time. It’s a ridiculous sight to watch me carry a child who’s already half my height and dangle him over the toilet. Lesson No. 3 is I must have a sense of humor to survive life’s stresses. Otherwise, I’d just cry.

And finally, I’ve learned that I’m blessed to have such kind-hearted neighbors, friends and family. They visited us, sent Eli get-well packages, brought meals and groceries and offered to watch my kids for a few hours. Most importantly, they’ve prayed for Eli’s little leg to heal. We thank you from the bottom of our hearts.