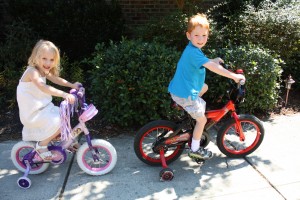 If there is an award for the slackiest parents of 2010, my husband and I should nominate ourselves. This weekend we gave our twins their birthday presents, which really wouldn’t be so bad if their birthday hadn’t been four months ago!

We didn’t intend for it to take this long. Time just got away from us. In our defense, I’ll say this has been a terribly chaotic summer for our household…moving into a new house, renovations with lots of setbacks and two children with broken arms.

In the midst of packing up our house, we bought Mila and Eli their first bicycles in May. It was raining on their birthday, so we decided it wasn’t a good day to unveil bikes. Then we began scrambling to pack and get ready for the move. Honestly, I’m surprised the bikes didn’t get lost in the move.  I still can’t find some of my clothes.

Then a couple of months of living in boxes, maneuvering around construction and late nights followed. Mark and I were exhausted nearly every night, and we didn’t have the energy to assemble bikes in the evening after putting the kids in bed. If I’m being honest, I should say the assembly job was my husband’s job. Let’s face it. A chimp could probably put together a bicycle before I could.  He was so worn out doing so many other jobs around the house after working a full-time job. I couldn’t ask the poor guy to do any more than what he was doing.

Just as we were about to bring out the bikes, Eli broke his arm and was in a cast for five weeks. Again, that wasn’t the perfect timing for a bike. Well, last Tuesday his cast came off. I was nearly bursting with excitement about finally giving the bikes to my twins until I remembered one thing. I had a family photo session set up for Thursday night. After four months and four cancelations (moving, poison ivy, broken arm No. 1, broken arm  No.2), I wasn’t going to risk a possible injury—not with the luck we’ve had lately. Nothing would stand in my way of this family photo.

On Saturday, my twins got the surprise of their little lives. They came outside to see two shiny bicycles just waiting for them. I was happy to see their sweet little faces light up with joy. I also was glad to rid myself of the guilt of not giving my babies a 4-year-old birthday gift. To be honest, they never even noticed that Mommy and Daddy didn’t give them a birthday gift in May. I’m not sure why it bothered me so much.  They walked away with more than enough loot from family and friends at their birthday party to notice a gift was missing.

Now, I watch them pedal away and pray with every fall that we don’t see the inside of an x-ray room anytime soon.