A boy and his T-shirts 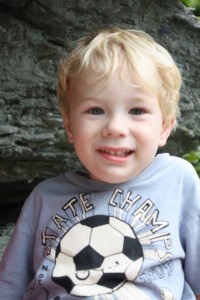 Girls aren’t the only ones who care about what they wear. I’ve learned that little boys care just as much about their attire. Let’s just say my 2-year-old son is quite passionate about what shirt he puts on each morning.

Siler’s fashion rule No. 1 is the shirt must have a picture on it. Rule No. 2 is that picture better be of a ball. We basically rotate between three T-shirts….a green soccer ball shirt that has the number “8″ on the back, a blue soccer ball shirt and a gray basketball shirt. Now, the basketball shirt has gone M.I.A., so I’m down to two shirts. I’m sure the basketball T-shirt will be found sometime after summer is over, stuffed in some random place like a kitchen cabinet or under a mattress.

Siler still would have a baseball shirt in the rotation, but I finally had to confiscate it from his drawer because it had long sleeves. He claimed he wasn’t hot while wearing it, but I was afraid the poor child would have a heat stroke playing outside in 90-degree heat in a thermal shirt.

Most of the time, at least one of the shirts will be clean. With a family of five, I do laundry more often than some people bathe. On the rare occasion when one of his beloved sports shirts isn’t clean, my little guy will do a search of the laundry room until he finds it. I’ll admit to letting him once wear a soccer shirt with spaghetti stains on it because the  battle wasn’t worth it. Plus, the standards for cleanliness deteriorate with each child. It’s sad but true.

For the time being, I know I’ll be greeted at my bed far too early each morning (most days just after sunrise) to a two-year-old shoving a T-shirt in my face. “May I wear the green soccer shirt with the No. 8.,” he says. Thank goodness he’s at least polite about it.